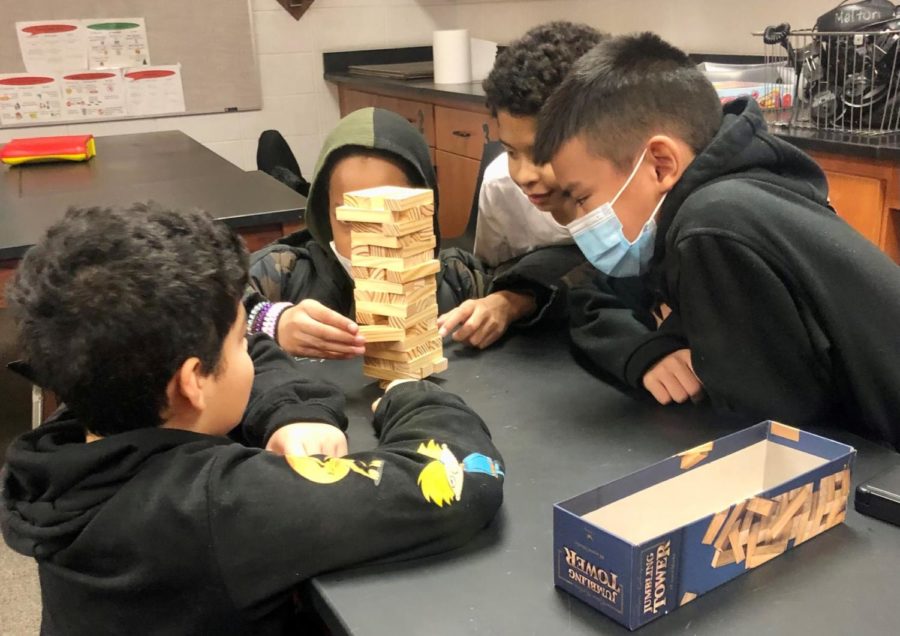 Sixth grade boys challenge each other to Jenga in Mrs. Melton's room.

As soon as Dr. Williamson opened the activity sessions each month, teens scrambled to schedule themselves. Whether it be drama, crime-scene investigation, or Dungeons & Dragons, sessions filled up fast. Categories included creative arts, foodies, games, or physical fitness and served as a reward for working so hard.

“The school district decided that they wanted to create an equitable program at all middle schools,” Dr. Williamson said. “I was pleased with the cooperation from the teachers and students. Plus, I had all the confidence that students could pick their activities on their own, and they were able to do that and have a great time.”

In Anime with Mr. Brown, students broke into groups to evaluate categories such as best character, story arc, and animation. They also competed on who had the best evidence to support their opinions.

“I can talk and relate with people about anime,” Addison said.

Mr. Brown reflected on how Activity Day gave students the much needed space to be more themselves.

“They spend most of their time at school, and some of that time needs to be dedicated to having fun and exploring their own interests,” Mr. Brown said. “I also love how activity day exposes kids to other kids and peers who have the exact same interests.”

Dr. Florez believed Activity Day allowed students some down time where they did not have to think about academics.

“Sometimes they don’t get exposure to some of the things they want to do, and this is a way for our staff to assist them in doing something they are interested in,” Dr. Florez said.

Mrs. Chenault hosted creative writing where a favorite activity was “Roll-a-Story”. Students rolled dice that correlated to a piece of paper with characters, setting, and conflict. Each number on the dice had a different character connected to it. They enjoyed thinking outside of the box to create a story.

“I like writing stories and putting my imagination into them,” Jordan Qualls said.

“We got to socialize and practice improv with others who share the same passion,” Arayah said.

“It’s pretty fun in there, and I get to laugh, which I really like,” Diane said.

Jesse Covarrubias, 8th, chose drawing with Mrs. Choo where they cut and pasted images onto an empty grid to complete a picture.

“My favorite film was Lava because it is emotional and teaches you to still have hope,” Maricza said.

Ms. Campbell believed it was important for students to have time to have fun at school and enjoy activities they might not do at home.

“Students need the chance to relax, get to visit, and get to know others who are interested in the same things as they are,” Ms. Campbell said.

Annisa Linthavong, 8th, valued how Galaxy Painting with Mrs. English showed students’ creativity and self expression when mixing art with science to represent the starry sky.

Katie Barroso, 8th, chose Interior Design with Mrs. Grubbs. Using Google slides, students designed their own houses and picked pictures of what they’d like to have in their rooms such as walls and floors, furniture, decor, a kitchen, and a master bedroom.

“I like to decorate houses and organize things,” Katie said. “Activity Day is a reward for how hard we work.”

Alexander Salmeron, 6th, has had tons of experience with building.

“I like thinking of new designs and interiors,” Alexander said. “Activity Day is good because it helps make up for missed field trips.”

“We had laughs, expressed ourselves, and ate popcorn,” Adrianna said.

Of all the activities she tried, Brooklyn Warden liked Mindful Art with Mrs. Daniel the best. Working with the counselors Mrs. Daniel and Mrs. Cox, students found an affirmation quote, painted a canvas, and stenciled their quote on the canvas.

“It was peaceful,” Alexa said.

Mrs. Daniel believed students need an activity they can choose and feel comfortable in.

“Having a choice gave them a chance to have fun and relax from the stress they feel from school,” Mrs. Daniel said.

“Origami calms me down, and I enjoy making things with paper,” Jose said. “I love origami so much that I will never give it up.”

Mrs. Powers liked that Activity Day helped students connect with each other and teachers they might not have met otherwise.

“It also allows them the choice of trying something new or doing something they love, if it is offered,” Mrs. Powers said.

Gabby Uriate appreciated that Activity Day allowed her to make new friends, try out cool activities like using the Crique machine to make stickers, and get a break for her brain.

“I liked stickers with Mrs. Chase because I got to make what I wanted,” Gabby said.

Sisavat Douangpanya, 8th, liked Sweet Snacks with Mrs. Wilhite the best. A favorite session was when students listened to a read-aloud of “Thunder Cake” by Patricia Polacco and then enjoyed dessert.

“We got to eat a chocolate ‘Thunder Cake’ afterwards,” Sisavat said.

Journey Phomsopha liked 3-D Sketch-Up with Mr. Tierney the best. Students learned the basics on tinkercad and added and manipulated shapes that turned into 3-D prints.

“It’s really fun to create something and watch it build from computer to a real thing,” Journey said.

Mr. Tierney felt that Sketch-Up provided a chance to see something that they may not have experienced.

“They may find it interesting and pursue this for a possible career choice,” Mr. Tierney said.

Mrs. Melton found that the best thing about monthly activity days was that everyone socialized without electronic devices.

“Students from all grade levels are interacting, making eye contact, and laughing, too!” Mrs. Melton said.

Cesar Recinos enjoyed having something to look forward to each month, and often chose Chess with Ms. K. Dunn. Chess is a game that builds problem solving skills, critical thinking, and friendships. Some students stepped up and acted as a coach to other teams.

“Having my friends also play chess made it even better,” Cesar said.

“You could play and get to know others with a game that takes wits,” Litzy said.

Ms. Dunn believed Activity Day benefitted students because it gave them the opportunity to explore interests and activities that they might not get the chance to do in a regular class.

“It helped them discover new hobbies and find out what they are good at,” Ms. Dunn said. “Activity day also allows them to have fun and spend time with friends.”

Joseph Naranjo liked Legos with Ms. Newman the best. They had access to booklets with samples and ideas to replicate whatever they chose.

“Ms. Newman let us build whatever we wanted as long as it was school appropriate,” Joseph said.

In Mr. Hornung’s room, students played Smash Karts, which is similar to Mario Kart, and created their own battle royal sessions.

“Smash Karts is my favorite because I got to hang out with friends and have fun without consequences,” Jovanni Chambers Sanabria said.

Mr. Hornung enjoyed seeing the students’ competitiveness in each game.

“Students love playing Smash Karts because they can have fun without the fear of being blocked or removed on GoGuardian,” Mr. Hornung said.

“BINGO is easy to play, and I like Mrs. Medlock,” Elizabeth said.

“It was easy to win so many different prizes,” Andy Sanchez Ponce said.

Mrs. Medlock appreciated how Activity Day broke the monotony of the regular routine.

“It also gave us teachers a time to actually have something fun to do since we focus so much on our curriculum!” Mrs. Medlock said.

Of all the options, Adamaris Ramirez, 8th, only attended Mrs. Holland’s Latin dance where students jammed out to a playlist of LatinX dance music assembled by classmates.

“It helped us wake up more and get our brains going,” Adamaris said.

“Dance is my thing,” Steven said.

Angeli Mejia, 8th, also loves to dance. She has a cultural passion for dance.

“Latin dance lets others see some of my culture,” Angeli said.

Alexa Alvarez, 8th, liked getting to try something new.

“Activity Days gave students ideas on what they might want to do in the future,” Alexa said.

Mrs. Holland believed that students getting to pick an activity with a teacher they might like to be around was a great idea.

“Plus, they got extra time to be with their friends and just have fun!” Mrs. Holland said.

“I got to dance with friends,” Karen said. “Just Dance is the best!”

Allen Sandoval really liked Coach Caldwell’s ultimate frisbee, which is similar to flag football. The goal is to keep going to get to the endzone, and if your team doesn’t catch the frisbee, then the other team gets it.

“A monthly activity allows them to relax and not focus so much on the stress of school and enjoy something that may fall in line with their interests,” Coach Caldwell said.

For Angelina Chanthavongsa, Disc Golf with Coach Cash was the best activity. Students had to throw a disc into a basket in as few shots as possible.

“I have fun with my friends while learning proper throwing,” Angelina said.

“Coach Cash is funny when he calls people dinguses, and it’s funny seeing people be way off from making it – basically, epic fails,” Malakai said.

“Things that we like, we will keep, and things we don’t, we will modify to make it best for each and every student,” Dr. Hinkle said.