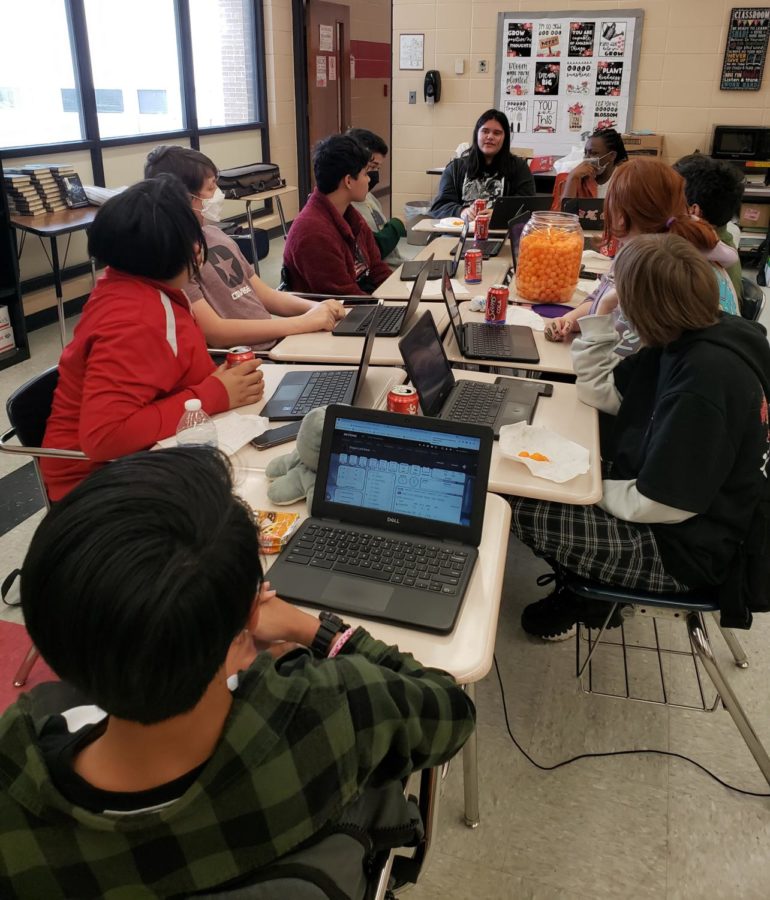 As they gathered around a table, teen adventurers awaited the details of their quest. The roll of the dice determined if they would attack goblins, run from a mad woman, or ambush thieves. They ended up at a cabin and had to choose whether to enter it or follow footprints leading to an old woman with a special dagger.

In the fantasy world of Dungeons and Dragons (D&D), players design their own characters with backstories and travel to different dimensions where friends can turn foe. It is extremely important to make good, strong bonds to stay alive. Anything is on the line in D&D!

Having played before with her older brother, Kassidee Stewart, 8th, became the club’s Dungeon Master. As DM, Kassidee narrated the quests and presented options for the players who had to roll the dice and decide how to navigate through the treacherous journeys.

“I liked hearing how the adventurers dealt with situations in the quest,” Kassidee said. “Seeing how they react to certain situations is hilarious.”

Like Kassidee, Harleigh Goodman, 8th, was inspired to join by a family member. Her father talked about playing D & D, and it sounded interesting.

“I enjoy the storyline and seeing how well we all get along with each other,” Harleigh said. “My character, Hawke, is an Aarakocra warlock and former soldier. It’s a great character because it’s based on me and characteristics I enjoy in a person.”

“The choices players make are often unexpected like when nobody was able to hit the robbers besides me,” Nelson said.

“I created a charming illusionist sorcerer named Elphas, which is a smart idea because he can create apparitions to charm his adversaries,” Kyas said. “For example, Elphas talked a goblin out of attacking him.”

“The funniest moment was when Kyas impersonated Elro the Elf with an accent,” Jaxson said. “My character – Karl the Conqueror – is a fire genasi rogue, which is helpful because he can cast fire to defeat enemies.”

Vinh Tran, 8th, joined the D&D club simply because he wanted to be a dragon.

“I like watching how unlucky the characters can be, like when someone rolls a number below 5, which is really bad,” Vinh said.

Kyas talked Cruz Mouton, 8th, into joining, and Cruz did not regret that choice.

“I created a very strong character named Mr. Hecate, a Dragonborn druid, who is also a healer,” Cruz said. “I figured he could help the team both with healing and attacking something. For example, when we got attacked by three goblins, I poisoned one in the eye and killed it.”

Kassidee and Kyas also talked Trinity Alson, 8th, into joining D&D, and she liked how everyone had different opinions on which actions to take, such as how to defeat goblins. Trinity’s character is a wood elf cleric named Nyx. Elves are magical beings that are graceful and tied to music, poetry, and art.

“Nyx is the group healer, so if anyone gets hurt or is on the verge of death, she can help,” Trinity said. “One time, Mr. Hecate lost a lot of health points after being hit by a bandit, and Nyx restored all of his health.”

Alex Romero, who joined the D&D club because his brother Cruz said it was fun, relished in seeing the bad guys suffer. Alex chose to create a Genasi Sorcerer named Aither who has the ability to levitate.

“If Aither had to be quiet, he could just levitate so no one could hear him, and if he needed to hold his breath underwater, he could do that for a long time,” Alex said.

Watching his uncle play D&D inspired Francisco Martinez, 7th, to join. He created a barbarian goliath, a risky choice since they are strong and reclusive, which makes them a huge target!

“I like fighting, and my character, Sir Dinkle, was made for that,” Francisco said. “I also created a human character, so that if my goliath dies, I can still play.”

“My character, Anurak, is an eladrin fighter who is resistant against charms,” Annabelle said. “Magic can’t put him to sleep. He is valuable because he is able to do things others can’t.”

Kyas had already played D&D before, which enabled him to sub in as DM.

“I have enjoyed watching everyone choose certain paths in their adventure,” Kyas said. “Sometimes you have this whole plan, but the group chooses to go a way you didn’t think about. This creates a situation where you have to improvise and think out of the box.”

In addition to meeting monthly on Activity Day during REDS, the D&D club also played after school in Ms. Mullin’s room.

“It’s impressive seeing how well the students apply critical thinking skills and creativity to solve dilemmas,” Ms. Mullin said. “They are also funny to listen to, like the time Cruz’s character fell into a hole. As the team tried to figure out how to get him out, Cruz remembered his character is 6.8 feet tall and could just step right out and move on.”