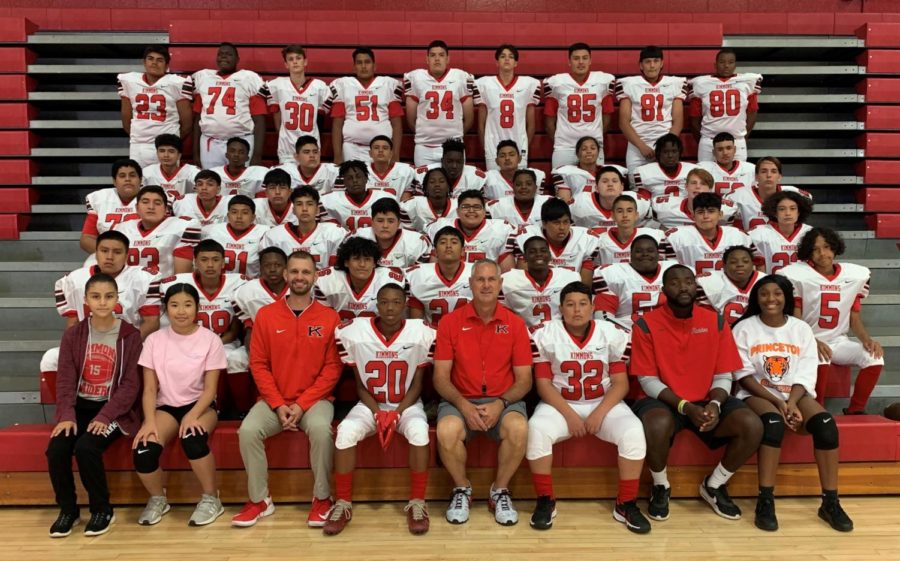 With the first half over, football players and coaches ran into the locker room. Everyone unbuckled their helmets and put them on the ground.

Nicky Chompranouvong recognized that the Raiders were the underdogs throughout the season.

“We had to be confident,” Nicky said.

“Even if we would lose, Warren would tell us to keep our head up,” Joseph said.

To Angel Heredia, all the games they lost motivated the team.

“Losing made us want to WIN,” Angel said.

“During summer practice, we worked with discipline which we did not perform with the previous year,” Kamareus said.

“I wanted to help beat other teams and win,” Apolonio said.

“It kind of helped us on games, but we were always serious during game time,” Eduardo said.

Just the thought of making it to the big league motivated Marcus Sherman.

“I’d like to take care of my mom and buy her a big house,” Marcus said.

The Raiders had moments they liked the best, such as Gabriel Alfaro, who recalled the Ramsey game.

“They were a good team, and we tried and did not give up all the way to the last second,” Gabriel said.

Eduardo’s best moment was when he made three tackles in one game.

“It made me stronger,” Eduardo said.

Marcus enjoyed running the Texas or Dallas plays on the D-line.

“I got to blitz the quarterback,” Marcus said.

Warren Bijou’s best moment was when he scored against Van Buren.

“I also got two interceptions, which meant a lot to me,” Warren said.

For Jose Ruiz, the Russellville game was the best.

“I pancaked some dude,” Jose said. “That’s the only playing time I got in that game.¨

“After that, I felt like I got better,” Elric said.

Raequan Whitaker enjoyed a moment behind the line of scrimmage.

“I got that sack on Van Buren,” Raequan said.

“It was the best I ever played,” Efrain said.

For Arian Armendariz, making an 80-yard touchdown stood out.

“It was my first touchdown of the season, and my family was there to experience it,” Arian said.

Coach Wright was most proud of the boys’ courage and commitment.

“The team never gave up during any games and gave 100% effort to the very end,” Coach Wright said.

Assistant Coach Arnold appreciated the boys’ week-to-week growth, ability to keep showing up when it was hard, and to keep going to work.

“That showed a lot about their character as a group,” Assistant Coach Arnold said.