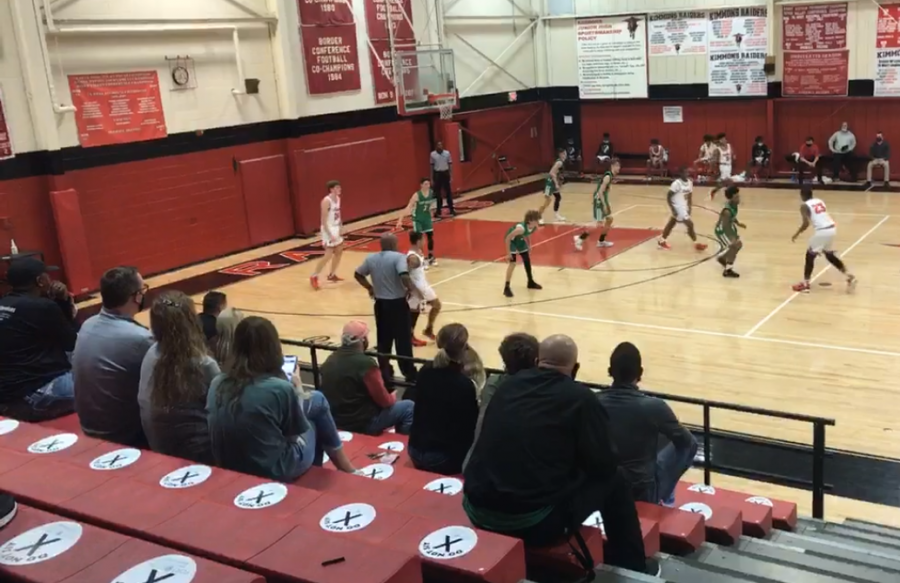 The loud roars in the crowd echoed off the walls as the Raiders ran up and down the Basketball court with Kimmons head to head with its opponent. Despite it being a close game, the boys refused to give up. As the buzzer of the last quarter blared, both teams looked at the scoreboard. Kimmons had won. People cheered as the teams lined up to shake hands.

The biggest challenge the boys faced during Basketball season was being quarantined multiple times because of the COVID-19 pandemic.

“The way we play requires our young men to be in top physical condition,” Coach Mondier said. “It seemed as if when our guys were getting to where we needed to be, we would get the call that some or all of our kids were being quarantined. It was also very difficult to have high-quality practices when there were only five to six athletes at practice at times. Once we returned, our conditioning was in a place where we needed to spend more time on it, but because we were halfway through the season, we had to spend more time on game planning for the teams we were playing rather than addressing the issues with conditioning.”

Cameo Sheppard, 8th, agreed with Coach Mondier on the negative impact of the pandemic.

“Getting quarantined put our team in a bad position,” Cameo said.

Treyven Taylor, 8th, struggled with the new requirements that came with COVID.

“We had to wear masks while practicing and stay six feet apart,” Treyven said.

Deric Pilgrim, 9th, cited getting behind as a major disadvantage of playing Basketball during a pandemic.

“The biggest challenge was catching up to the other schools since our preparations were limited from not having time to get ready,” Deric said.

Not everyone was grim.

“We started off bad, but then we came together and started winning,” Ziyan said. “Everyone on the team was pushed to be better, and it paid off in the end.”

Deric’s best moment was the “mesmerizing” late night shots and the grind everyday.

“Just working on my craft everyday was exhausting, but was worth it in the end by getting better shots,” Deric said.

The Trinity game served as Treyvan’s best moment of the season.

“I had three blocks, and we won,” Treyvan said. “The gym was loud from the audience.”

Ziyan liked hanging out with his teammates off the court.

“I liked having a good time like whenever we all walked to McDonalds and had bonding time,” Ziyan said.

On the court, Coach Mondier kept the boys’ spirits up when things got tough.

“Coach Mondier put his all into our team, no matter what situation or scenario,” Deric said.

“Coach Mondier never gave up and always had a good spirit,” Te’Vion said.

“Coach Mondier pushed us everyday and made us work hard,” Ziyan said. “He made it more intense and motivated us to win.”

As for being the final Kimmons freshmen to play the sport here, Devin felt it a bittersweet experience.

“It has been an honor to play here but wasn’t how I wanted to end the season because we lost a lot of games, and now I won’t be able to see the same teachers again,” Devin said.

By Kimmons Boys’ Basketball standards, the team had a below-average season, which was a struggle for players and coaches alike.

“I am most proud of those young men who continued to work hard and give their best effort, even though things didn’t go the way we liked, or as successfully as teams have been in the past,” Coach Mondier said. “I have tried to teach these young men during my four years here that the game and competition ALWAYS deserves or requires your best effort no matter what the outcome is. If you love the game and want to be a great athlete, your best effort is required 100% of the time. I am very proud of these young men that took that to heart and brought that work ethic the entire season.”