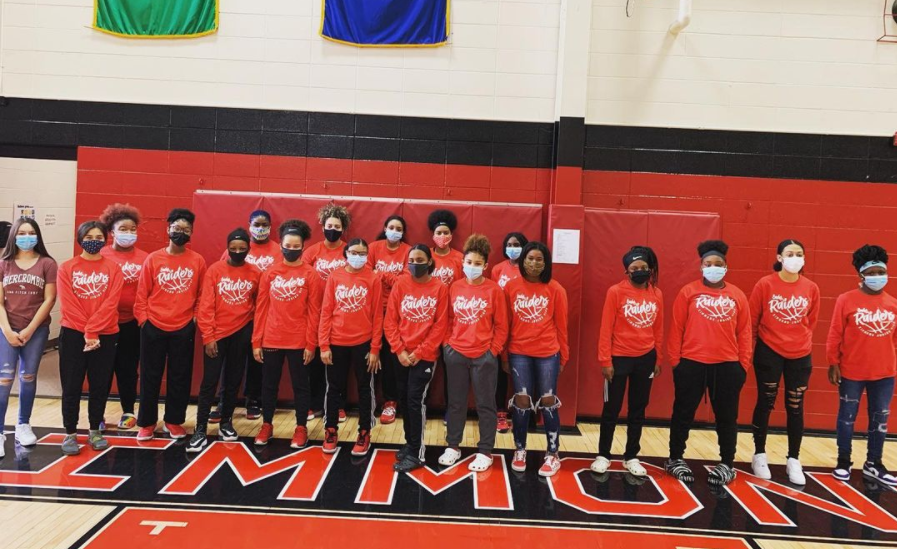 With multiple games canceled, the entire team quarantined, and no post season tournaments, the 2020-21 Lady Raiders Basketball season was definitely unlike any other. The athletes had to wear masks on the sidelines, cheerleaders and Raiderettes could not support the team at away games, and only a limited number of fans were allowed in at certain venues

One of the biggest challenges this season was the number of girls who the team ended up with after quarantines.

The Lady Raiders missed several games and practices due to quarantines.

“It was upsetting because this was our last year at Kimmons getting to play together, and we didn’t get to play that much,’’ Marissa Gibson, 8th, said.

The entire team getting quarantined was also challenging for Mallory Craig, 9th.

“We had to bounce back and keep playing,” Mallory said.

As for DewayneJayne Manning, 8th, her biggest challenge was keeping her mask on and above her nose during games.

“It kept falling down,” Jayne said. “Running with a mask on was tiring, and I couldn’t really do much with one on.”

Throughout it all, Coach Ludgood and Assistant Coach Candelaria inspired the athletes.

“Coach Ludgood always encouraged me to keep trying and not get down even when I’m doing bad and missing layups,” Marissa said.

“They always told us to stay safe and have a positive attitude, which helped us get hyped up to play against good teams,” Emily said.

Despite the downside, the season included some highlights, such as the Lady Raiders going 2-2 against Bentonville West and Fayetteville Purple. They also ended their difficult season on a three-game winning streak, defeating Chaffin, Ramsey, and Darby.

For Marissa, that last game stood out.

“It was the last time we all played together for Kimmons, and we won,” Marissa said. “I had fun playing with everyone.”

DewayneJayne’s best moment was the last Darby game when they won both 8th and 9th grade games.

“Winning against Darby was one of the biggest challenges to me, and it was really cool to win a game against them!” DewayneJayne said. “I also liked whenever I made a couple of shots and tried to score on my opponent’s goal. We all laughed, played around, and had lots of fun!”

Freshman Tahleigha Taylor’s best moment was when they all hung out after games.

“Even if we lost, we would still have fun,” Tahleigha said.

“I’m sad it’s over,” Te’Vionna said. “Even with the pandemic going on, this year has been full of great adventure!”

As for being one of the last freshmen to play for Kimmons Junior High, Mallory thinks it’s a big deal.

“I know that I will be part of Kimmons’ history as part of the final 9th grade team,” Mallory said.

“I am going to miss Coach Ludgood the most, and it’s weird not going to Kimmons anymore,” Tahleigha said.

Coach Ludgood felt proud of how the Lady Raiders always competed no matter the number of girls available to play on game nights.

“We constantly had several girls playing in different positions because of missing girls,” Coach Ludgood said.

By the end of the season, the ladies became accustomed to the “new normal” but by no means did they enjoy the changes.

“One thing I’ll say is even from an adult/coach’s perspective, it was such a frustrating year,” Assistant Coach Candelaria said. “I can’t imagine how difficult it was if I were to have been in our athletes’ shoes as junior high athletes. They did an incredible job all year of doing what was asked of them, showing up every day under unique circumstances, and never complaining. They appreciated that we even got to have a season at all.”