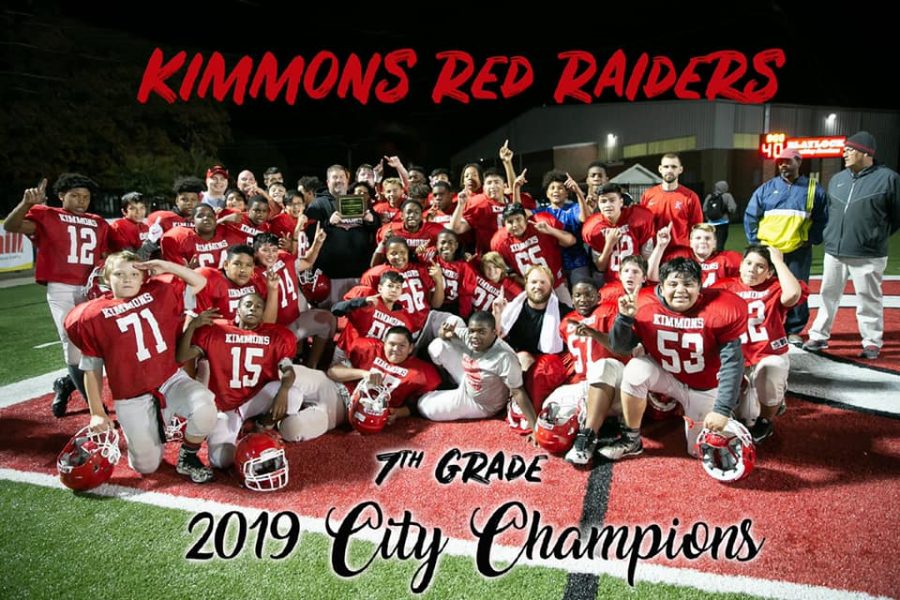 As the last moments of the 7th grade Football City Championship game approached, all hope seemed to be lost. About to be tackled, Ja’Cobe Coleman scrambled with the ball as Issac Wright ran up behind him and called out his name. Ja’Cobe lateraled the ball, allowing Issac to score a touchdown!

“It was the best moment because that touchdown defined the game outcome,” Demarkus Vega said. “The biggest challenge was bringing back hope to our team. No one believed a win was possible anymore until that Raider Miracle.”

“Everybody thought we were gonna lose, but I still had faith,” Issac said.

Chaffin’s line of defense presented a challenge to the Raiders throughout the game.

“We had problems,” Rocky Zaizar said. “It took a little bit, but we got the hang of it.”

The Cougars were determined to win.

“They didn’t want to lose and kept on getting through our defensive and offensive lines,” Gabriel Oliva said.

“Their running back was fast and has a lot of skill,” Isaac said.

For Terry Freeman, losing most of the game was the most challenging part.

Even with these challenges, the Raiders succeeded as Fort Smith City Champions.

“It is an honor to be part of a very talented football team and being champions because you don’t get moments like this every day,” Damarkus said.

“Being part of the winning team feels very good, especially since this is my first year at Kimmons,” Cameo said.

Some valued the respect earned by the 8-6 win.

“It feels life-changing because of having the opportunity to be recognized by many,” Luis Hernandez said.

Others appreciated the opportunity to get better.

“I feel good because I know I improved myself,” Tashard Holden said.

The team honored the coaches’ efforts to help them reach their full potential. This involved conditioning, focusing on blocking techniques, and giving motivational speeches that got the players hyped before every game.

“Our coaches prepared us all mentally and physically and reminded us every day how hard we worked for this to just let it go,” Demarkus said.

“He challenged us to play every game and gave us good advice before the games,” Terry said

Luis felt that the coaches worked themselves to the bone.

“They made sure we would be the best so we would succeed,” Luis said.

The coaches pushed the boys to their limits.

“They made us go hard and do the best we could to win,” Ohagie Johnson said.