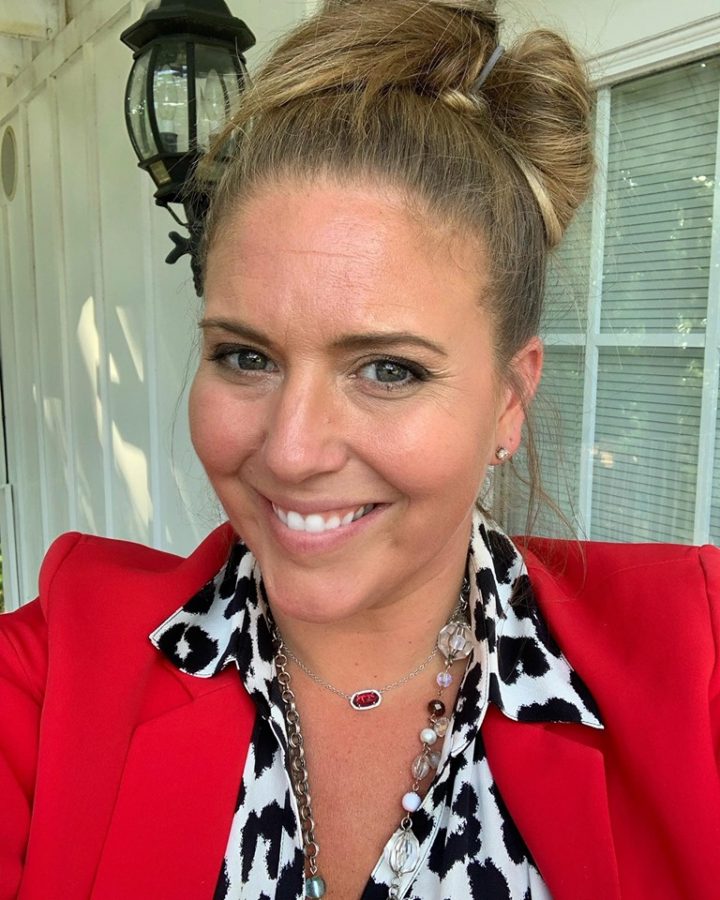 In less than a month into the school year, Mrs. Cecil has already stood out as a first-year teacher by winning the September Teacher Spotlight.

“I feel so welcomed to have been voted the Teacher of the Month and am happy to be here,” Mrs. Cecil said. “I am settling in quite comfortably. Everyone is SO NICE — the administration, teachers, custodial staff, office personnel, cafeteria workers, and the students.”

Mrs. Cecil has said that her biggest challenge is lesson planning for two subjects on differentiated levels.

“Some students can easily write a page of complete sentences, and some kids struggle to spell every single word,” Mrs. Cecil said. “It’s very difficult to figure out a fair way to grade the kids because of these vast differences in abilities. Also, my initial license was in English, so I’m very comfortable writing lessons for English, but I had the least interest in Social Studies when I was in school myself, so that’s been a ‘fun’ challenge to plan and learn with the kids.”

Mrs. Cecil hopes to establish a good routine in the classroom and make great connections with the students and their parents.

“Routines are especially important for Special Ed students because many of them don’t do well with change,” Mrs. Cecil said. “I also love routines and knowing what to expect each day. I color coordinate my Google Slides by daily, matching the different colors on the whiteboard for each day, and I try very hard to stick to the plan and/or to update as needed.”

Making great connections with the students and their parents is also important to Mrs. Cecil.

“I take a genuine interest in the kids and their interests,” Mrs. Cecil said. “We always take a few minutes to chat and ask each other questions. I also make them practice introducing themselves and shaking hands while making eye contact. As for parents, I take a few minutes each week to text some with a photo or a few positive words. I don’t want the only parent contact to be when there’s a problem. I studied some Spanish in college, and I have been spending 20-30 minutes a day to learn and practice more with the Duolingo app since many of our parents only speak Spanish.”

Mrs. Cecil enjoys doing many things outside of school.

“Outside of school, I enjoy spending time with my husband and five daughters because they are all hilarious,” Mrs. Cecil said. “I also listen to music and dance because I have taught fitness dance for thirteen years at Marvin Altman.”
A surprising fact about Mrs. Cecil is a job she used to have.

“One of my favorite jobs was that I shined shoes at a hotel for 2.5 years,” Mrs. Cecil said.