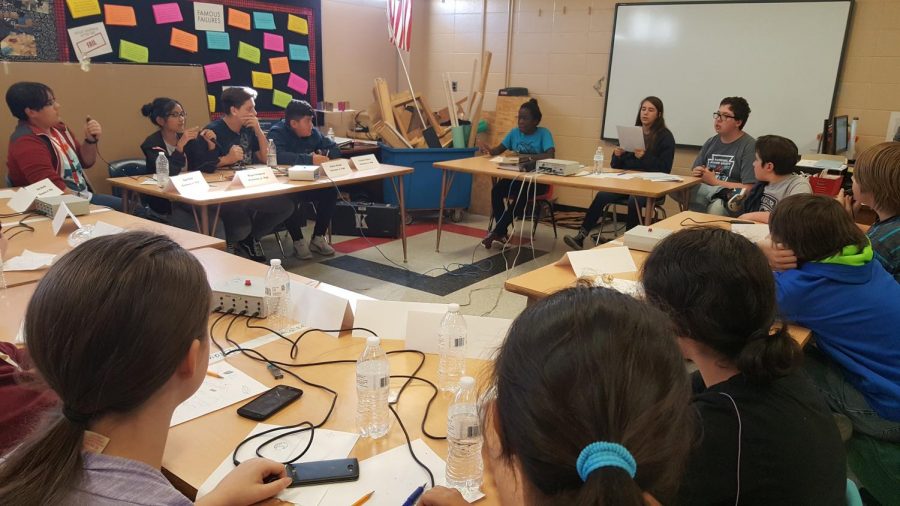 The buzzer blared as the Quiz Bowl member pressed the red button. Sweat rolled down his forehead as his teammates anticipated his answer. Drawing in a quick sharp breath, he said, “The answer is…25.” His heart raced. Was he right? Only the judge could tell. The crowd hushed. The anticipation rose. The intimidating figure leaned down to the mic, nodded, and said reassuredly, “That is correct.”

Quiz bowl is a game similar to Trivial Pursuit. Teams compete head-to-head to answer questions from all areas of knowledge including history, literature, math, science, fine arts, current events, sports, and popular culture. Round one involves twenty toss-up questions; round two more toss-ups, plus bonus questions which require team collaboration. Round three is the lightning round which focuses on one topic that the team with the lowest score gets to choose. They then have one minute to provide as many correct answers as possible.

Like Band, Orchestra, and Choir train for concerts or all-region, Gifted and Talented Education (GATE) students train for Quiz Bowl tournaments across the district. They have learned some tricks to prepare for and compete against the toughest schools.

“You need to know random topics from history, science, etc, and you also need to be a quiet person,” Cole Grist, 7th, said. “Chaffin is the biggest competition all the way because there are kids who will hear the first two words of a question, respond, and get it correct.”

Being fast and bonding as a team are keys to success.

“You have to be quick to push the buzzer,” Kalea Williams, 7th, said. “What helps the most is establishing a good relationship with your team. If someone gets a question right, we cheer them on.”

“It takes a lot of knowledge — everything from the President with a size 14 shoe to factorials of 7,” Nathan Fuhrman, 8th, said.

“The best part is going to the games, even if we lose,” Leilani said. “Chaffin has definitely been the biggest competition because they are really fast at buzzing in.”

“Either Ramsey or Chaffin are our biggest competition because they’re all really smart,” Anyely said.

“I like my teammates because they’re really friendly and funny,” Anyely said.

“When I found we came in 1st place, I was so excited to know we are that good!” Alex said.

Cristian Salinas, 8th, enjoys being part of the team.

“Quiz Bowl tests your knowledge, and each teammate has his/her own specialty,” Cristian said. “For example, mine is numbers and math.”

Mrs. Walker encourages students to get involved and see if Quiz Bowl is something they want to pursue.

“You don’t have to know everything,” Mrs. Walker said. “Your strengths — whether it be math and amendments, art and mythology, or science and literature — could be beneficial to our team.”