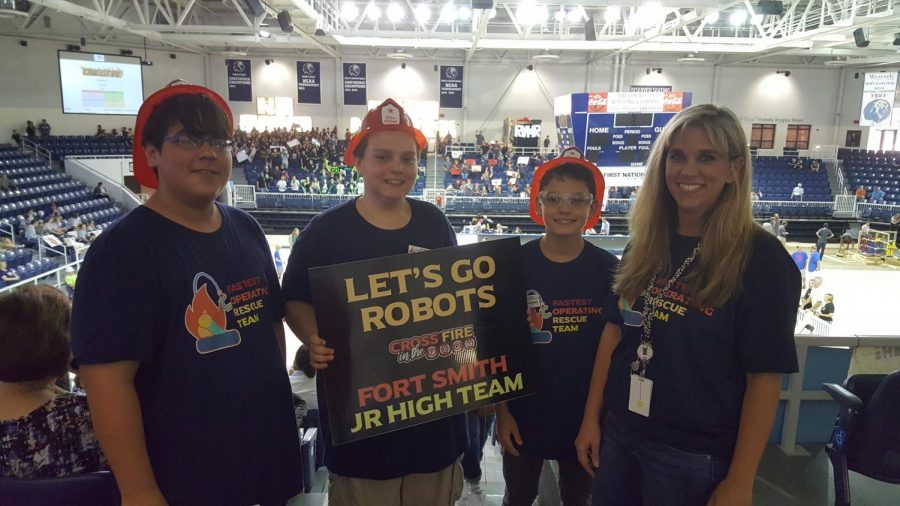 As the stakes increased in the Robotics Competition held at Stubblefied Center in October, the nervous-but-excited team members wondered if their invention was good enough to win. Because this year’s theme was “Cross Fire,” the robot drivers’ task in each round was to save Manny the Mannequin from the burning building and remove the toxins. Using a controller, drivers had to maneuver their robots’ claws to pick up and drag Manny (who was made of white plastic pipe) to safety. They also had to pick up and shoot ping pong balls a the fire, which consisted of stacked red plastic cups.

Members of the Fort Smith Public School’s (FSPS) team wore bright red fireman hats and cheered on not only their own team, but others as well. Cheerleaders from Chaffin even had a giant cardboard car that they “drove” all around the stadium as the Chaffin band played to rally support for the FSPS team.

“I thought the competition was fun because we got to wear fire hats, jump around, and have fun,” Xander Varos, 7th, said.

Cole Grist, 7th, seemed to like the chaotic atmosphere of the event.

“I enjoyed the madness that my team caused at the competition,” Cole said. “Chaffin also brought their band, and I got to meet so many nice people from the different schools in the city.”

Cole Grist, who worked as a programmer, faced some challenges in the preparation stage.

“Well for one, I was a prodigy and didn’t know how to program the robot, so, I studied from different videos and was able to program part of the robot (a.k.a. the motor).” Cole said.

Zander Sells, 7th, also helped build the team robot and got to be one of the drivers at the competition.

“The biggest challenge was that it was hard to adjust to the robot’s controls because they changed a little from when I first tried out,” Zander said.

Btaya Virakone’s job was to ask business owners to sponsor the FSPS’s Robotics team to raise money to buy the needed parts and equipment to build the robot.

“The biggest challenge of fundraising was knowing what businesses the team already asked because the meetings would be in the morning at Chaffin, and I could not be there,” Btaya said.

At the competition, the FSPS Robotics Team won first place in two categories, second in four categories, and sixth place in one. They also qualified for finals, which will be held at the Convention Center in downtown Fort Smith on Dec. 1st and 2nd.

“Next year, I plan for Kimmons to have their own robotic team,” sponsor Mrs. Walker said. “Start thinking now what area of robotics you would like to join! You can build and program the robot, do web design, market the robot created, cheer on the teams, and so much more! The new theme will be announced next fall, so stay tuned for announcements to join!”