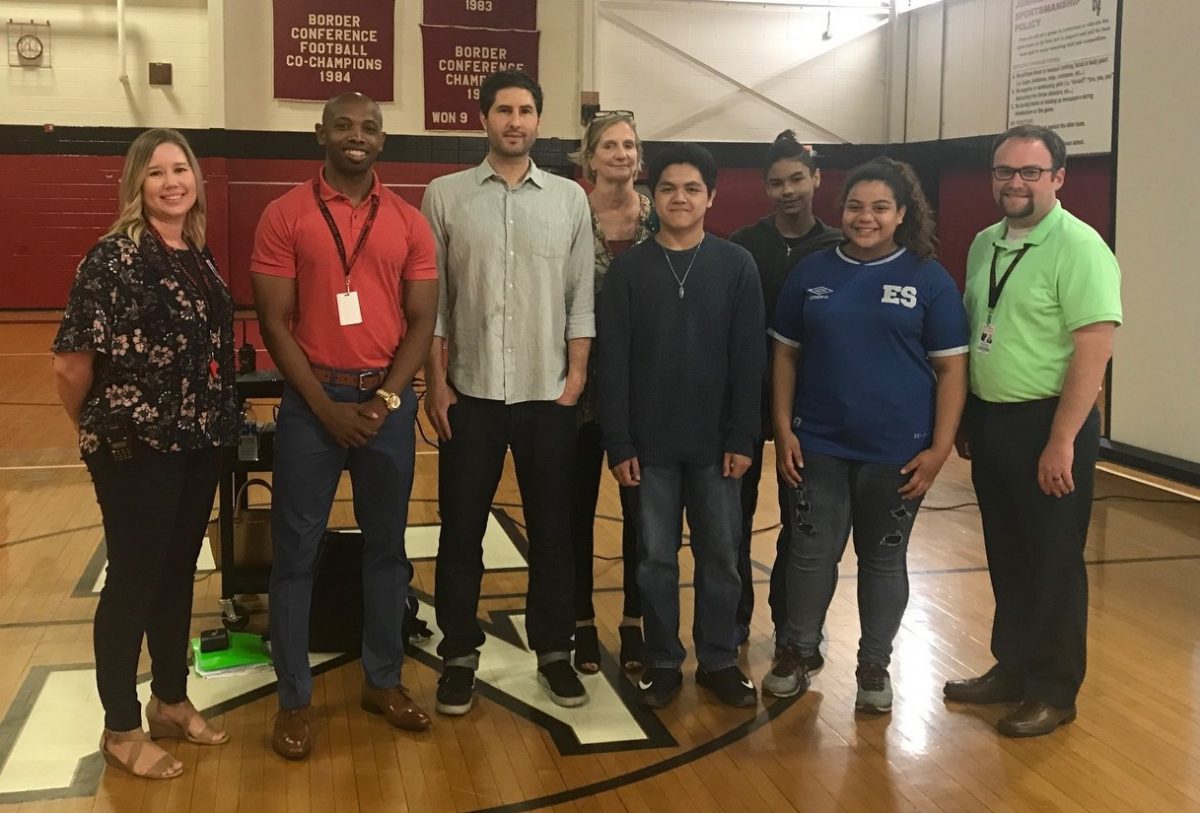 Award-winning young-adult novelist Matt de La Peña visited with Raiders last month and entertained the crowd with stories about growing up as a mixed-race kid in California.

“What I remember most about de La Peña is that he said that he is a ‘white mexican’,” Kevin Willis, 8th, said. “That shows how you can do and be anything you want no matter your race.”

Born to teenaged parents, de La Peña never knew his mother’s real family since she was a foster kid. He was really close with his dad’s side, who were Mexican. In fact, his father is a first generation American, and his grandparents had crossed the border illegally in Tijuana.

de la Peña also shared that there was zero education in his community, but he overcame that and went to college at the University of the Pacific on a full basketball scholarship. There he earned his Bachelors of Arts degree and then went on to earn a Masters in Fine Arts in Creative Writing at San Diego State University.

“Nobody I had ever met had been to college, except my teachers,” de La Peña said. “College just wasn’t something that people did. When you grow up in a community where education isn’t the most important thing, you are less likely to be a reader.”

Some students felt inspired by how de La Peña overcame the challenges.

“I also want to be the first one in my family to go to college,” Carla Martinez, 9th, said. “He inspired me to keep going and never stop.”

A New York Times bestselling author, de la Peña has written Ball Don’t Lie, Mexican Whiteboy, We Were Here, I Will Save You, The Living, and The Hunted.

Some students at Kimmons are reading his books now.

Since his community members barely had any education, de la Peña struggled in school and was held back in the 2nd grade because he could not read. Some Raider “newcomers” connected to his experience because they too had failed when they did not know English well enough. Others related to how bad de La Peña felt.

“Matt de La Peña labeled himself as dumber than the other kids,” Sophia Prouphan, 8th, said. “I’ve put labels on myself as well, and they truly are hard to change once you’ve done it.”

Despite de La Peña not like reading as a kid, that all changed when he went to college. Some students found it hard to believe that an author didn’t grow up liking reading since he did end up writing books.

“I remember that he wasn’t really into reading as a kid,” Skyla Phifer, 8th, said. “Most authors read a lot as kids and unlike most, he didn’t.”

Matt de la Peña also shared a funny story about the time he wrote an awkward poem to his high school crush, Julie Gonzalez. It was a poem all about the girl’s scalp! After delivering the poem to Julie, he had watched her with her friends at McDonald’s to monitor her reaction.

“You may call it stalking, but I call it research,” de La Peña said.

Many years ago, Julie messaged de La Peña about the poem to which he denied knowledge and then responded with “Please destroy the document.”

“I remember his ultra-cringy poem to that girl because I live for cringe,” Yance Walker, 8th, said.

Yance wasn’t’ the only student who enjoyed listening to de La Peña.

“I will remember how he explained his past,” Nichole Shibley, 7th, said. “De La Peña isn’t like other authors. He didn’t act all serious like he didn’t have any sense of humor. He made a joke out of it, really.”

“I will remember how wacky and hilariously hard his life was because you just don’t meet people that inspiring every day,” Akil said.