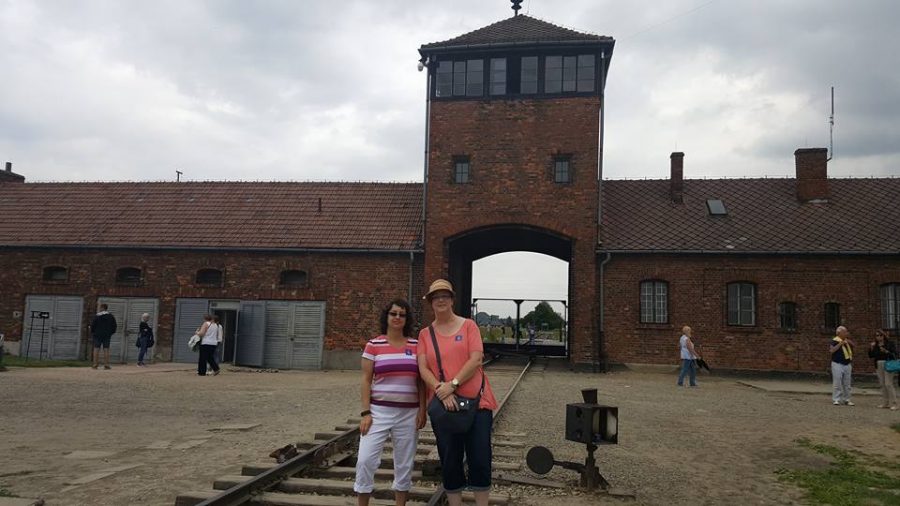 Through the training, Mrs. Springs deepened her understanding of just how complex the Holocaust really was in Europe and that every single human being had their own story and experience.

“I was most impressed with the level of authenticity and integrity to which the exhibits at the museum were created,” Mrs. Springs said. “It is in this integrity that both victims and survivors of the Holocaust are honored. It was a very humbling and often breathtaking experience.”

Mrs. Springs’ students initially had mixed background knowledge about the Holocaust. Some knew next to nothing and others had read The Diary of Anne Frank in sixth grade. Either way, they gained new knowledge from Mrs. Springs.

“In the museum there were millions of pictures of Jews who were killed,” Erika Andino said. “They were there to remember their horrible death in the concentration camps.”

Ms. Mullin and Ms. Florez traveled to Poland to see specific Holocaust-related locations, including Auschwitz-Birkenau labor camp and the site of the former Warsaw ghetto. They also visited the Anne Frank house in Amsterdam, Holland.

“I was inspired to travel overseas to experience firsthand the things that my students read and to be able to come back with real-life experiences to report to them,” Ms. Florez said. “The students were most impacted by the gas chambers and the fingernail marks on the walls. They made the connection to the suffering that the people felt on a daily basis.”

One of Ms. Florez’s students, Sky Masterson, found the Kappos most interesting.

“It’s crazy to think that Kappos could punish other Jews the way they did knowing they did nothing wrong,” Sky said.

Others focused on what the S.S. guards did to children.

“The guards killed babies for target practice,” Ashley Bustillo said. “I thought the babies would grow up to work for the Nazis.”

In Ms. Mullin’s classes, students were most interested in learning about life in the camps, terrible diseases, and the cruelty of the Nazis.

“I was interested in how Dr. Mengele did experiments on twins because he tried to give them diseases,” Destini Hernandez said.

To help students visualize what they read about, Ms. Mullin showed photos from when she visited Dachau Concentration camp in Germany while there with the Navy Reserve in 2002. She also created a video of her and Ms. Florez’s 2016 trip to Auschwitz-Birkenau.

“The part of the 2016 tour that made the biggest impact on me was seeing and touching the actual wooden bunks that Jewish prisoners slept on at Birkenau,” Ms. Mullin said. “Visitors lay roses to commemorate the victims. Inside the building, a somber feeling hung in the air, and, like at Dachau, I could feel the ghostly presence of those who died there over 70 years ago.”

Ms. Mullin hoped that sharing her travels would improve her students’ understanding of the Holocaust, The Diary of Anne Frank, and Night.

“Ms. Mullin’s travels showed me how Auschwitz looked when the Franks, Van Daans, and Mr. Dussel were there,” Jireh Gonzales said.

Olivia Chankheo focused on the items taken from the Jews.

“What resonated most for me about Ms. Mullin’s video was the huge amount of shoes, clothes, eyeglasses, and hair combs because each pair represents someone who died,” Olivia said.

In addition to the stolen items, students were impacted by the death of Jews.

“The gas chambers where the Nazis killed the Jews stood out most for me because it’s scary imagining the Jews choking, throwing up, and blood coming out of their ears,” Perla Perales said.

By using training and travels, the 8th grade Language Arts teachers wanted to instill in students a desire to keep such horrific things as the Holocaust from happening again.

“If we can get even just a handful of teenagers to feel empathy for people who have experienced trauma, then we have been successful,” Ms. Mullin said.