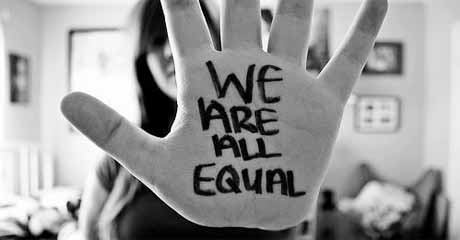 Racism is just out of this world because it’s discrimination against people based on the color of their skin. Some people get down in the dumps or even feel suicidal. Racism happens because people think it’s okay to treat others differently just because of their color.

Like for instance, I was being treated differently because I was with a white group of people, and I was the only mixed kid in the group. They made me feel like I was less than them. They left me out of everything they did. I felt like I didn’t fit in with them. After awhile, I ditched them and went with some other groups that didn’t have only one kind of race. There, I wasn’t left out.

Some would say that it’s funny to watch someone so different from them get treated badly. Others would try to stop it or even help keep that person from getting disrespected. Sure some different skin-toned people are less fortune than others, but that is not an excuse to treat them badly. We were all made equal.

Just think about how if you got treated differently, wouldn’t that make you feel bad and wonder why you’re getting treated that way you are? Racism is just another way to make people feel bad for the color of their skin. It is discrimination against people. And that is not okay.